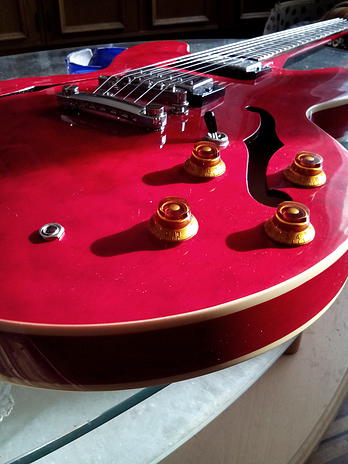 In my opinion, this guitar is "bestbuy" from Epiphone. I think it's their best guitar, and although it's not perfect, you get your bang-for-the-buck here.

The finish is absolutely beautiful and I've seen a lot more expensive instruments that didn't have such a beautiful finish. The pictures and videos don't do it justice, as it looks a lot different in person. The finish is seethrough so the beautiful grain of the wood i visible.

Pickups are spectacular, and resemble the Gibson classic 57s. They are alnico II magnets, voiced like the classics. getting the woman tone on this guitar is a breeze. Electronics are solid, and there's no need to change them unless it breaks down over time. Fret job on mine was almost perfect, there was one high fret just below the high E and B strings, and all it took to fix this was a tap with the plastic hammer, as it just wasn't seated correctly. There are no sharp frets. Tuners are Grovers, and they are very good, keep their tuning well, and will definitely stay on this guitar.

Controls and the switch are very responsive, and do their job well. The harware is nice and shiny chrome, with no flimsy parts, and the stopbar stays on the posts even when you take all the strings off. I was actually very surprised by the quality of the strings that

came with the guitar, and kept them on for good 2 months. They are 10s and sound great on a Dot. Now for someone like me with small hands and short fingers, I must say that the neck is a bit chunky and thick, but surprisingly easy to get used to. You just can't put this guitar down, once you start playing.

Out of the box the action was pretty good, but I tweeked it even more, and if you don't count the Gibson Les Paul Custom Black Beauty that I own, which just has crazy low action, this guitar has the lowest action of all my guitars.

Now all Epiphone Dots have 2 problems you should adress instantly, and after that you got yourself a great instrument.

Tusq nuts are made with a specially formulated material which couples the strings' vibrations to the neck and brings out the hidden harmonics and richness in every note.

The second and last problem is the output jack. Now bear in mind that this is not an Epiphone Dot problem in my opinion, but a design problem for al ES 335 guitars, as I've read online that people with expensive Gibson ES 335s have the same annoying problem. There is very little "meat" for the nut to grab onto when you tighten this jack, so it constantly unwinds and the jack falls into the guitar. I solved this by installing a new LP style jack on the side of the guitar and don't use the one on top. My thought process was that even if I get a better jack, the

In conclusion, once you take care of the nut and jack, you have yourself a very nice professional instrument  that looks like a million dollars, and sounds like two. It's very versatile, and you can play almost anything on it, although I don't believe you could preform metal music live with it, as it is semi-hollow, and at stage volumes with ultra high distorsion, you're asking for trouble with feedback. 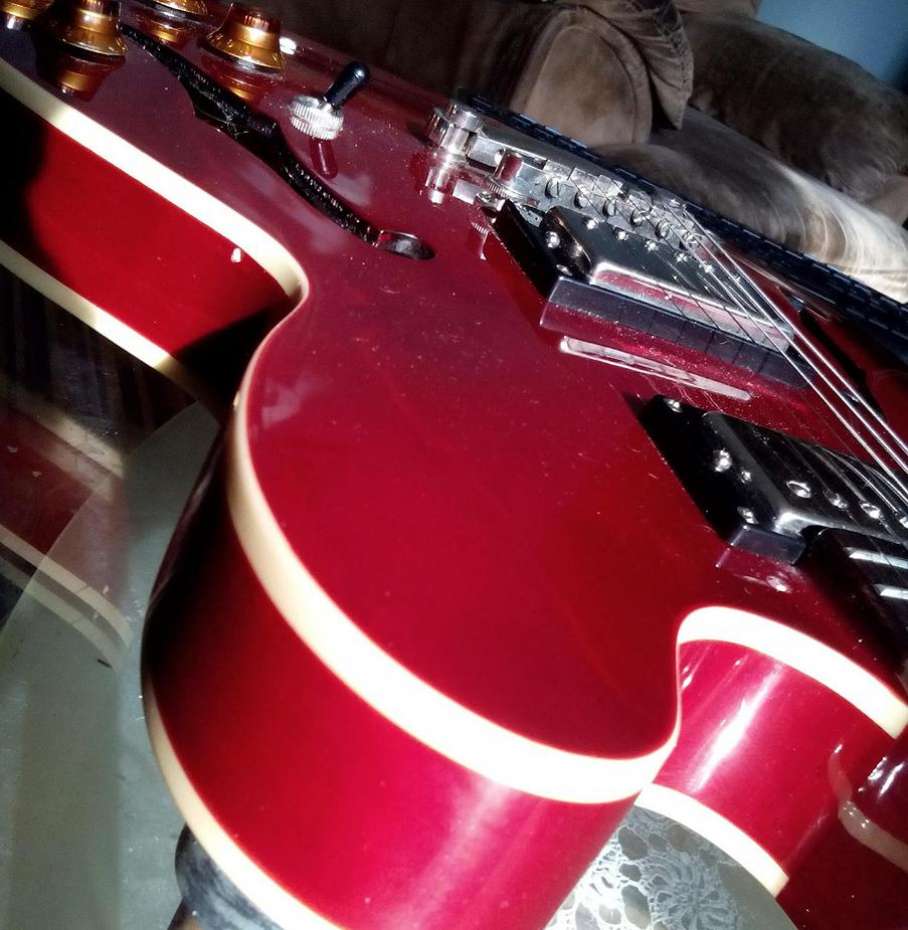 First weak point is the nut. You need to change the plastic nut as soon as you get the guitar. Strings get stuck in it, and all the people whining about tuning stability of this guitar - CHANGE THE NUT. I went with the Graph Tech TUSQ XL 1/4" Epiphone Slotted Nut from Musicians Friend for $8.75 and it's amazing. Strings are automaticaly lubricated and always in tune.

possibility of it falling into the guitar during a live performance is not something I would take a chance with. A Les Paul style jack is screwed into a metal plate and there is no way it can come loose by itself during a gig.